Oak Creative appointed by Dover District Council to deliver branding, website and communications for the restoration of the Maison Dieu. This is a National Lottery Heritage Fund project, which aims to restore the iconic building to its former gothic glory in the twenty first century.

The project will place the Maison Dieu back at the heart of the Dover community, restore its position as an international stepping stone and act as an anchor for Dover’s regeneration. 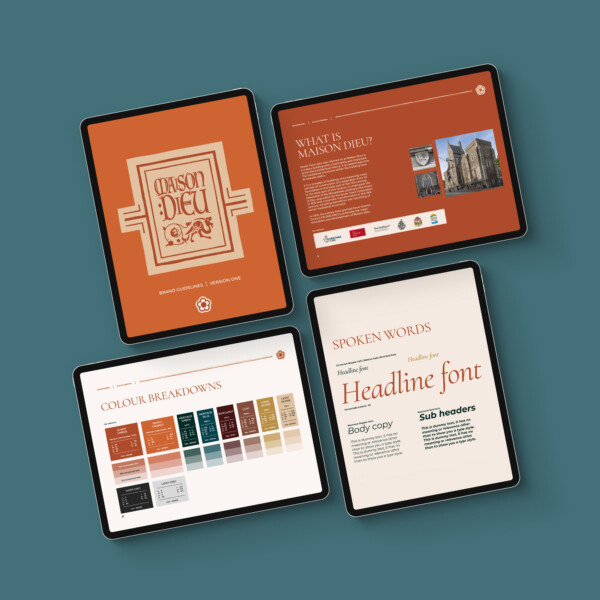 What is the vision for the Maison Dieu in Dover?

The Maison Dieu (House of God) is Grade I Listed and a Scheduled Monument, built in 1206. Fast forward to 2022 and it is undergoing a major restoration and refurbishment, funded by the National Lottery Heritage Fund.

The vision for the project is to reawaken this gothic fantasy by creating a thriving cultural venue and reopen the building to visitors and the community. Dover District Council appointed Oak Creative to provide marketing, communicate and website design expertise in order to communicate the project with relevant stakeholders.

What is Oak Creative's approach to the brief?

The Maison Dieu brief is split into 3 phases: branding, website and communications. To date, the branding has been completed with the new website due to go live in Aug 2022.

The first element of the project was to review the project brand identity. The brief was to keep the iconic gothic style logo and red which was already in use, but refine and develop the brand. This included:

We created a brand guideline document which would set the style act as a strong foundation for the website and communications work moving forward.

The communications element of the project will roll out in 2023.

What's the history of the Maison Dieu and why is it important?

The Maison Dieu has been assessed to be of ‘outstanding significance’ architecturally, historically and culturally. Built around 1203, saints, sinners, mayors, monarchs and citizens have all been through the Maison Dieu over its 800-year history.

It was the last building of status on the main route to the continent which travellers would pass when leaving England right up until the 20th century and the first that would greet them on their return, an international stepping stone. It is no coincidence that key moments in English history have been played out within its walls.

The Maison Dieu originally served as a Medieval hospital for pilgrims from all over Europe arriving in England en-route to the shrine of St Thomas Beckett in Canterbury.

At the dissolution under Henry VIII it was requisitioned and converted into a victualling yard serving the naval fleet. Finally, in the 19th century the Maison Dieu was taken on by the Dover Corporation, renovated and expanded to provide a courthouse, gaol, seat of government and concert hall. The remarkable expression of gothic revival is the building that greets residents and visitors today.